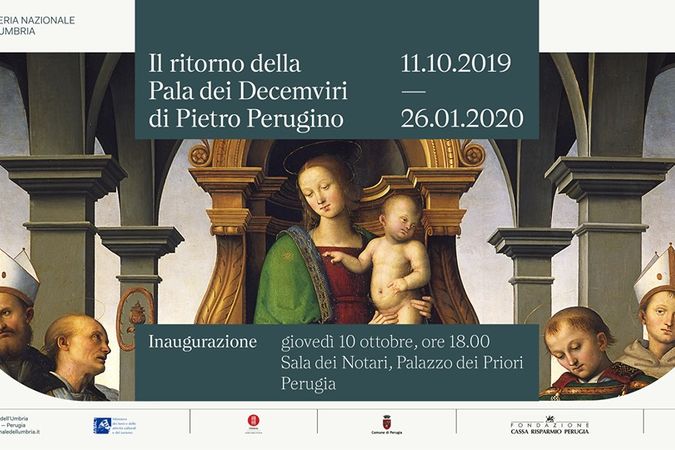 From 11 October 2019 to 26 January 2020, the National Gallery of Umbria in Perugia will be the scene of an exceptional art event. After two centuries, thanks to the collaboration with the Vatican Museums, the "Pala dei Decemviri" by Pietro Vannucci, known as Perugino, returns to the space for which it was conceived, within the Cappella dei Priori, the heart of the main administrative body of the municipal Perugia.

The exhibition, curated by Barbara Jatta, director of the Vatican Museums and by Marco Pierini, director of the National Gallery of Umbria, proposes the extraordinary reunion between the cornice and the cymatium, preserved in the National Gallery of Umbria, and the central table of Perugino, from the Vatican Museums, exhibited in their original location.

The Chapel of the Priors, built in the mid-fifteenth century during the extension work on the Palazzo dei Priori, was the subject of decorative and furnishing interventions to make it the most noble and representative place of the building: the glazed majolica floor, decorated with floral motifs alternating with angels in flight, it was built by Giacomo of Marino, known as il Cavalla, between 1455 and 1457; while the walls with the famous pictorial cycles dedicated to the two patron saints, one of the city and the other of the palace, Ercolano and Ludovico di Tolosa, were frescoed by Benedetto Bonfigli between 1454 and 1469. The wooden choir, inlaid with griffins and plant motifs, was started by the carver Gaspare di Giacomo da Foligno and completed by Paolino di Ascoli.

To complete the decoration of the chapel was called Pietro Perugino, who executed for the altar the Decemviri altarpiece depicting the Madonna with Child among the saints Ercolano, Costanzo, Lorenzo and Ludovico: Ercolano the "defensor civitatis" from the siege of Totila died in 549; Constantius the first bishop of the city martyred at the time of Marcus Aurelius; Lorenzo the patron saint to whom the cathedral of Perugia is dedicated and Ludovico the protector of the Palazzo dei Priori, proclaimed a saint in 1317. The iconographic theme makes explicit the identity value of the painting and emphasizes its close link with the civic dimension.

The work was commissioned in 1479 to Pietro di Galeotto, but his death resulted in the assignment of the assignment to Pietro Vannucci in 1483. This second project also included the addition of a cymatium with the Madonna della Misericordia, for which, due to the excessive prolongation of the works, Sante di Apollonio was involved, who finished it in 1486. The following year, however, Perugino he was called to repaint the cymatium, since the Decemviri intended to celebrate the opening of the Monte di Pietà by affixing the image of Christ in piety.

The central table, which incorporates the compositional schemes already adopted for the S. Domenico di Fiesole and S. Agostino di Cremona altarpieces, was completed by Vannucci in 1495 and is signed on the throne platform “hoc Petrus de chastro plebis pinxit ". The altarpiece remained in its original location for just over half a century until 1553, the time of the transfer of the Priori Chapel to a new location in other rooms of the Palace.

In 1797 the work was requisitioned by the French troops as a result of the Treaty of Tolentino and was carried beyond the Alps in the Musée de la République, (later Musée Napoleon and today Musée du Louvre), in a common destiny to hundreds of other works belonging to the Church. For some reason, however, the French ignored the cymatium with the Christ in piety and the carved and gilded wooden frame by Giovanni di Battista di Cecco called the Bastone, who, after a stay at the Quadreria of the Perugia Academy, returned to Priory palace.
In 1816, when the long parenthesis of Bonaparte faded and the Bourbon monarchy was restored, Antonio Canova, sent to Paris by Pope Pius VII to recover the stolen goods, succeeded in bringing the table back to Rome, which - despite the vibrant protests of the Perugians - was destined for Vatican Pinacoteca.

Other exhibitions in Perugia 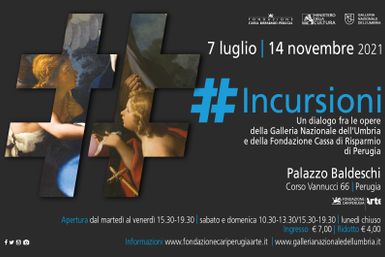