Treatise on Painting
leonardo-da-vinci/trattato-della-pittura
Leonardo da Vinci
1651
Pages containing human figures and a horse, which accompany the precepts of Leonardo’s Treatise on Painting included in the Editio Princeps printed in Italian in 1651 in Paris (in the same year a French edition was also published). This work was brought into being thanks to a group linked by a passion for art and a high level of culture. Chief among them was Cavaliere Cassiano dal Pozzo, a descendant of a noble Piedmontese family and personal secretary to Cardinal Francesco Barberini, known as the “Cardinal Master”. For the iconographic part Cassiano was helped by his friend, the painter Nicolas Poussin, who created the wonderful drawings, but whose graphical interpretation of Leonardo's artistic theory was far removed from the original drawings and closer to the style of the time. The drawings of the diagrams that demonstrate scientific arguments were drawn for the editio princeps by Pierfrancesco degli Alberti (1584-1638), author of the Maps in Bosio’s Subterranean Rome.
fullscreen 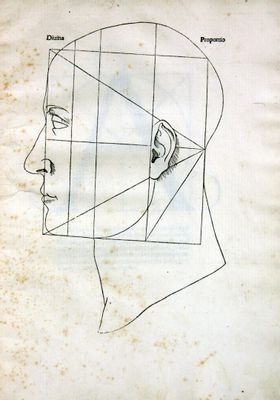 Divina Proportione
frate-luca-pacioli/divina-proportione
Frate Luca Pacioli
1509
"... having, with the diligence worthy of the enterprise, already completed a book on painting and human movement…": This passage, taken from a letter addressed to Ludovico Sforza from Luca Pacioli and printed in "Pars prima" of his Divina Proportione (On the Divine Proporton) is among the earliest evidence of Leonardo's work on a Book of Painting. Pacioli was a "compatriot" and friend of Leonardo, whom he met in Milan in 1496 when he was called by Duke Ludovico il Moro to teach mathematics. When he wrote the Divina Proportione, which originated, as we learn from the dedication of the work, from the scientific conversations within the extraordinary milieu that was the court of Ludovico il Moro and to which also Leonardo belonged, he felt the need to complete the text with geometric diagrams. For this task he drew on the skills of Da Vinci, whose original drawings he kept in order to display them for the admiration of visitors.
fullscreen 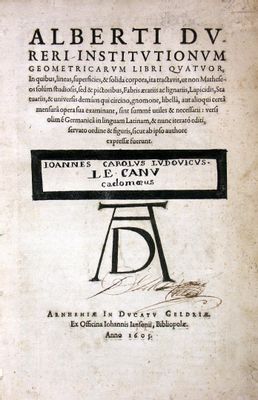 Istitutionum Geometricarum
albrecht-durer/istitutionum-geometricarum-1
Albrecht Dürer
1605
This is the fourth edition of the Latin version of Unterweisung der Messung, the four books on measurement by Albrecht Dürer, printed for the first time in his workshop in Nuremberg in 1525. The work stems from a larger project by Dürer aimed at creating a book in his language about art and painting, which would incorporate the knowledge necessary for the training of a painter, a project he never completed, but from which various treatises were born, among which this one. The master wished to offer German artists and craftsmen texts which would lay down the theoretical foundations and practical applications of their work. This desire emerged on his first trip to Italy in 1494-1495, where he was able to see first-hand the flourishing of reflections on the arts, the means of representation and the proliferation of writings on these topics: the basis of new Renaissance art. All this was sorely missing in the Germanic states: the preface declares that "... till now in our German countries many able bodied young people have been directed towards painting, though instructed solely through daily practice, without the inculcation of the foundations of their art."
fullscreen 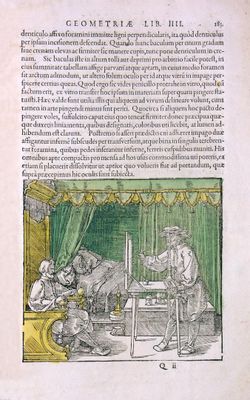 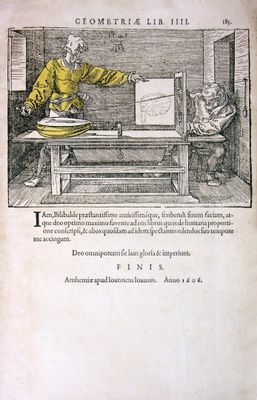 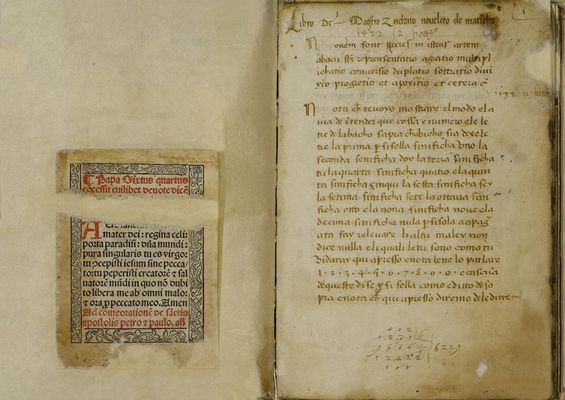 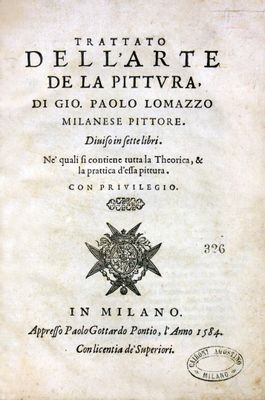 Treatise on the art of painting
giovan-paolo-lomazzo/trattato-dell-arte-della-pittura
Giovan Paolo Lomazzo
1584
Lomazzo, a friend of the pupil and heir of Leonardo's manuscripts, Francesco Melzi, came into contact with the writings of the Renaissance Master and repeatedly made reference to them in his writings. This is true also of his Treatise on Painting, which was first printed in Milan in 1584. Lomazzo also owned writings on the art of Leonardo, and thanks to these he was able to cite a part of the famous Comparison (comparison between the arts written by Leonardo in which painting was concluded to be a superior art form), which was not included in the Vatican Codex Urbinate lat. 1270 (manuscript compiled after Leonardo's death by his pupil and heir, Francesco Melzi). Lomazzo acknowledges having borrowed his praise of the plastic arts from a part of Leonardo writings that have since been lost. As such, Lomazzo’s work is considered to have been one of the most important sources for the spreading of da Vinci’s precepts in the field of painting, sixty-seven years before the publication of the editio princeps.
fullscreen 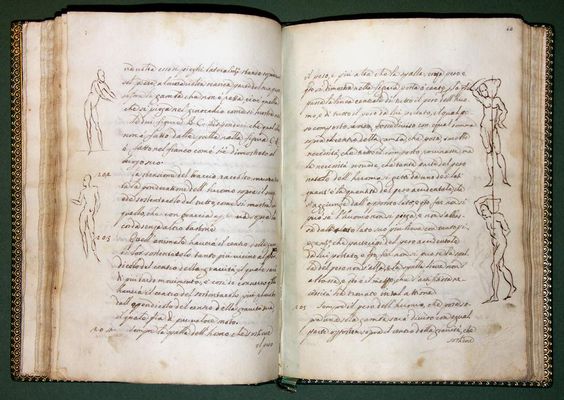 Treatise on painting
leonardo-da-vinci/trattato-della-pittura-3
Leonardo da Vinci
s.d.
Manuscript
An apograph manuscript of the Treatise on Painting by Leonardo da Vinciwas purchased on October 25th 1940 from the Hoepli Antique Bookshop of Milan. Held by the Raccolta Vinciana, the apograph was the subject of an essay by Carlo Pedretti published in 1959 (C. Pedretti, A New Apograph of the "Treatise on Painting" by Leonardo da Vinci, in Bibliothèque d’Humanisme et Renaissance, Tome XXI, Librairie E. Droz, Genève, 1959, p. 446-50), that stemmed from the fact that the manuscript, unlike the other apograph held by the Collection, had not been included by Steinitz in her bibliography: being instead erroneously recorded in the library catalogue as not relevant. The writing of the manuscript is uniform, from beginning to end, but small corrections to the text in another hand or probably either by another pen or using different ink were carried out, denoting checks made from a more correct source.
fullscreen 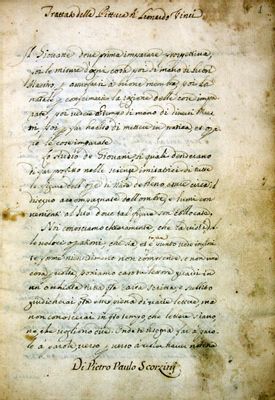 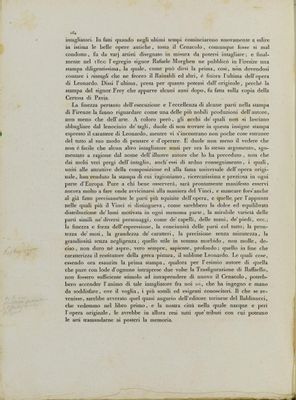 On Leonardo da Vinci's Cenacle
giuseppe-bossi/del-cenacolo-di-leonardo-da-vinci
Giuseppe Bossi
1810
Autographed annotations by Stendhal. As emerges from his journal, Stendhal purchased the volume on the 19 September, 1811, eight days after his first visit to Leonardo's Last Supper, during an approximately two week trip to Milan. However, two dates inscribed on the front doublure of the binding and on the front flyleaf, respectively 19 November 1814 and 12 October 1816, would seem to indicate a delayed and prolonged reading. The French writer, at the time engaged in the preparation of a Histoire de la peinture en Italie, countering that of Luigi Lanzi, which would be published in 1817, filled the original in his possession with numerous footnotes (on pp. 117, 118, 119, 122, 135, 146, 13, 164, 231, 232). These were substantially neutral at first, indicating a disimpassioned reading, despite the controversy that accompanied the release of Bossi’s book, then they became gradually more and more impatient and finally castigatory. For example: The author is entirely talentless, boredom and grand yawns.
fullscreen 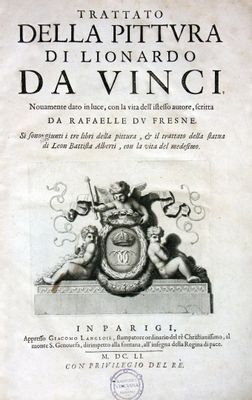 Other works on display

Other artworks in Milano 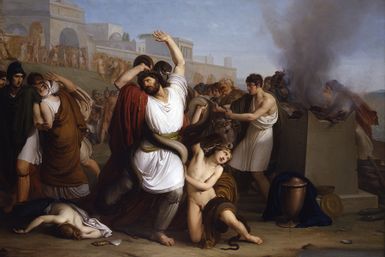 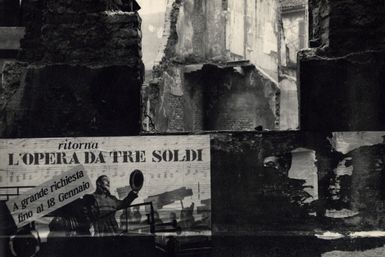 Poster for the show The three-piece opera by Bertolt Brecht 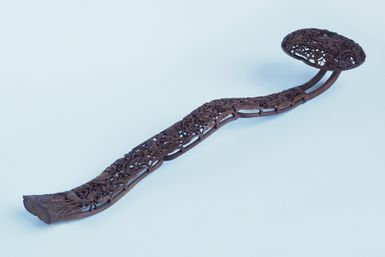 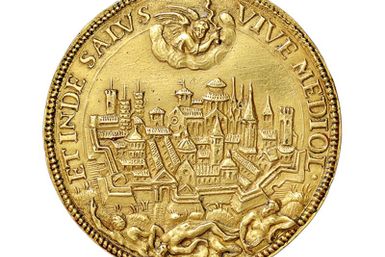 Gold medal of the Habsburg King Philip IV of Spain, Duke of Milan 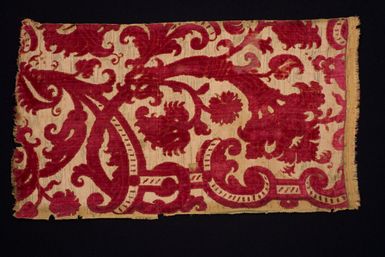 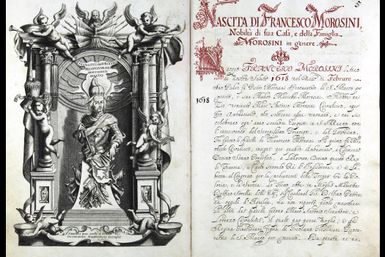 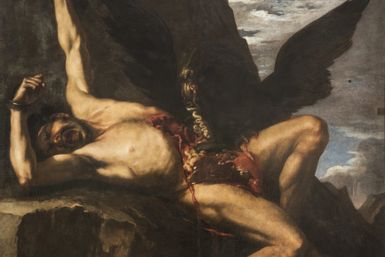 The Torture of Prometheus