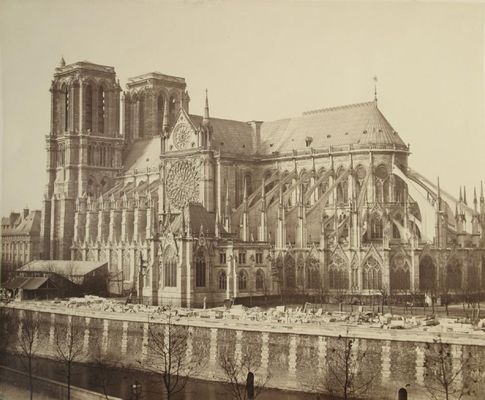 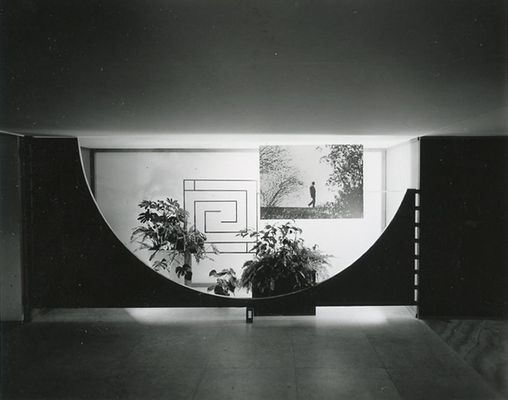 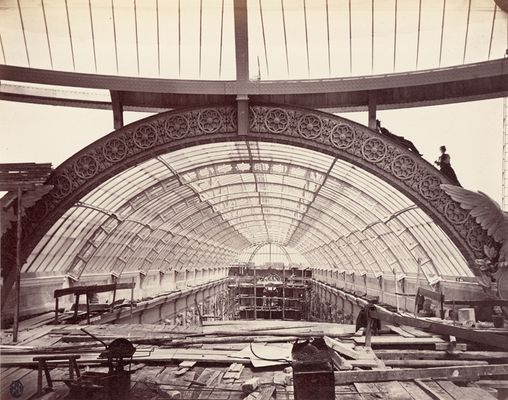 Construction of a arch for the dome of the Galleria Vittorio Emanuele II in Milan
hippolyte-deroche-francesco-heyland/costruzione-di-un-arco-d-imposta-per-la-cupola-della-galleria-vittorio-emanuele-ii-a-milano
Hippolyte Deroche; Francesco Heyland
1867
Albumen print
fullscreen 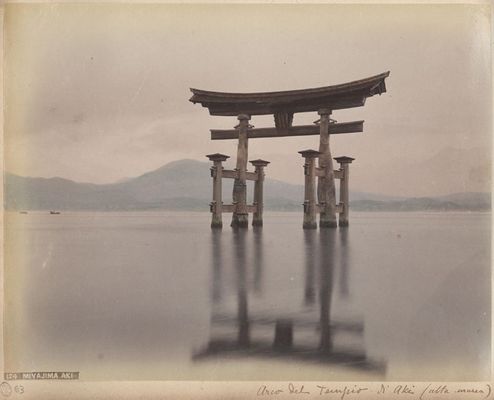 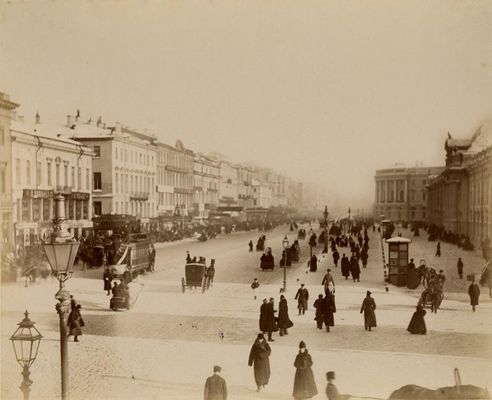 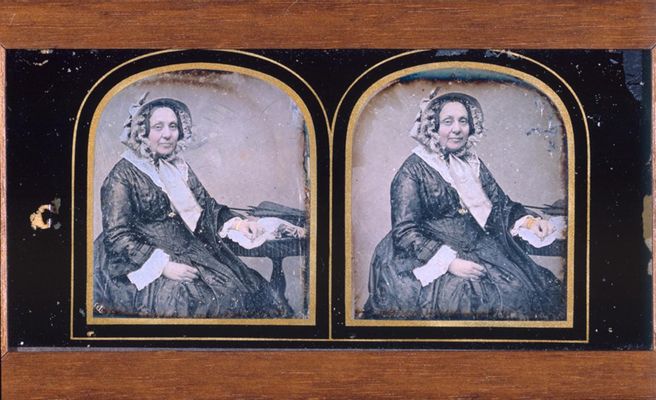 Portrait of Countess Giuseppina Durini Casati
alessandro-duroni/ritratto-della-contessa-durini-casati
Alessandro Duroni
1850
Daguerreotype, half plate, stereoscopic, hand coloured
Alessandro Duroni, optician and owner, from 1837, of a physics, optics and chemical instruments shop in Milan's Galleria De Cristoforis, was the first person to take daguerreotypes in Lombardy, for which he was lauded by the papers of the time. He undertook frequent work trips abroad and in 1848 opened a daguerreotype factory in Milan, with a studio for portraits in Corso Vittorio Emanuele II, formerly Corso Francesco. Duroni's Studio went on to become one of the most famous portrait studios in the country, and as such was able to photograph the most important public figures of the period, including Giuseppe Garibaldi, Nino Bixio, Camillo Benso Count of Cavour, Carlo Cattaneo and King Vittorio Emanuele II. Duroni, who had received the title of photographer to His Majesty, King Vittorio Emanuele II, took a full length portrait of the sovereign, which earned him a medal at the Italian National Exposition of 1861. One of his most noteworthy works is the hand-coloured stereoscopic daguerreotype portraying Countess Giuseppina Durini Casati, mother of the painter, Alessandro Durini.
fullscreen 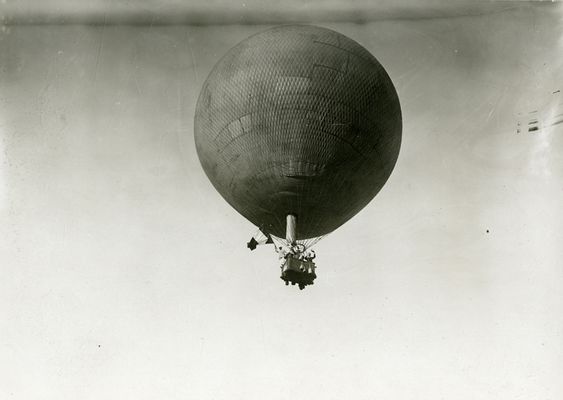 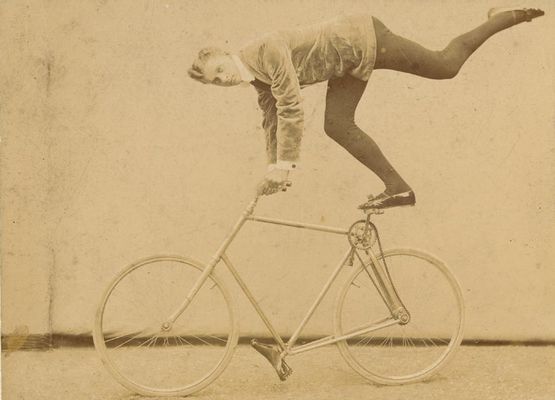 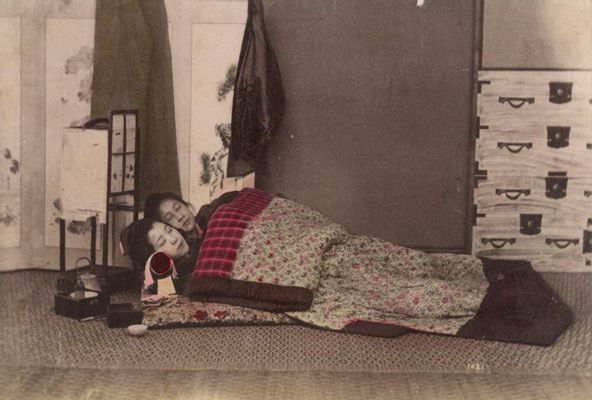 Inside a Japanese bedroom
kusakabe-kimbei/camera-da-letto-giapponese
Kusakabe Kimbei
1860
Coloured albumen print
A painter and colourist employed at the photographic studio opened by Felice Beato in Yokohama, Kusakabe also worked as an assistant to Baron Raimund von Stillfried. In 1881 he opened his own studio, contributing to the prestige that the “Yokohama School” was gaining among foreign travellers. Merging the art of the reportage and the cityscape, learnt from Beato, with the psychological approach to portraiture that he acquired in his work with Stillfried, Kusakabe became one of the most admired photographers in Japan, producing a vast archive of images of the country. The distinguishing feature of his work is the exceptional quality of his hand colouring, characterised by a broad chromatic range and particular density of colour. This photograph belongs to a rich repertoire of study portraits collected by Kusakabe throughout his career.
fullscreen 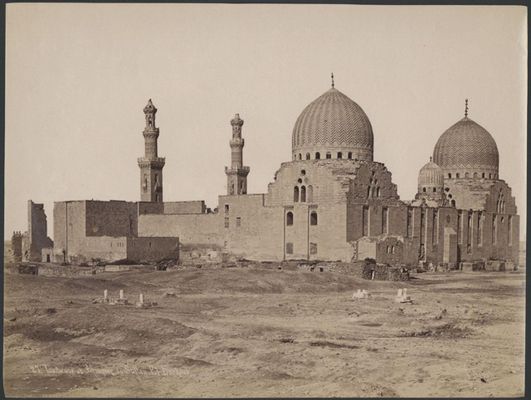 Cairo. Tombs and Mosques of Sultan El Barkouk
j-pascal-sebah/cairo-tombe-e-moschee-del-sultano-el-barkouk
J. Pascal Sebah
1870 - 1880
Albumen print
J. Pascal Sebah started his career in 1857 opening the El Chark printing works (meaning “the Orient “ in Arabic) in Constantinople, together with Antoine Laroche in what was referred to as the “Avenue des Photographs” on Grande Rue de Péra 439 next to the Russian Embassy. The studio specialised in oriental costumes, a genre in great demand among European travellers of the time, as well as cityscapes, portraying the capital's monuments, architecture and landmarks. The name Sebah was present at numerous exhibitions, from the Paris Universal Exhibition of 1867 to those of the Société Française de Photographie, of which his was a member, in 1869 and 1870. In 1873 he opened another studio in Cairo and the same year received an award at the Vienna Universal Exhibition, where, now official photographer to the Sultan, he presented an album containing 42 photographs, titled Les Costumes populaires de la Turquie en 1873, dedicated to the popular “subjects” that were widespread also among other studios, such as the water carrier, the rag salesman and dervishes. The subjects of the Sebah are rendered without an excess of artifice, such as the addition of accessories or painted backdrops. His catalogue of Egyptian scenery include the tombs of the mamelukes, the pyramids, the citadel of Assuan, the temple of Abu Simbel, the valley of Kings and other areas of particular archaeological interest. For his work on this collection he received a prize at the Philadelphia Exhibition of 1876 and the Paris Exhibition of 1878.
fullscreen 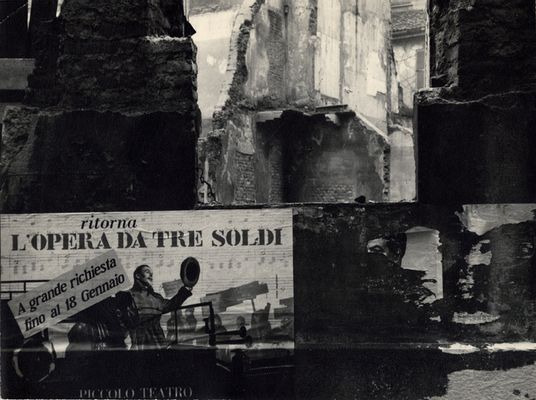 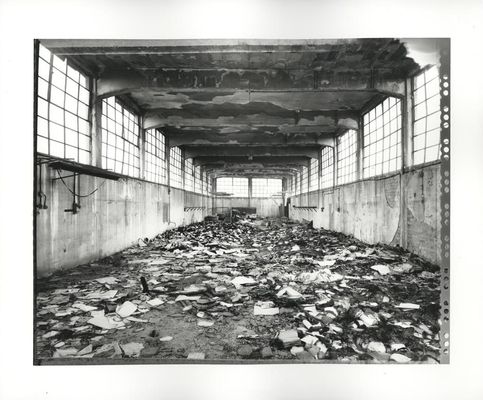 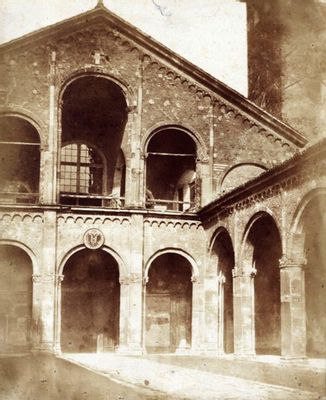 Quadriportico and façade of the Basilica of Saint Ambrose, right side
luigi-sacchi/quadriportico-e-facciata-della-basilica-di-sant-ambrogio-lato-destro
Luigi Sacchi
1851 - 1854
Salt print
Luigi Sacchi, an eclectic lover of the arts, entered the Brera Academy of Fine Arts in 1822. He initially studied painting then later moved on to studying lithography and xylography. His passion for photography can be traced back to the1840s, when he undertook a journey to Paris in an editorial capacity for, among others, Alessandro Manzoni. Sacchi's interest was sparked and he tenaciously studied photographic processes, particularly the calotype process. The main subjects matter of his photography were fine art, architecture and archaeology. Between 1851 and 1855 Sacchi designed and published “Monumenti, Views and Customs of Italy”, a series of 100 salt prints selected from the over 300 photographs taken during his journey through Italy to document the artistic charms of the country. The depiction of the right side of quadriportico and the façade of the Basilica of Saint Ambrose, with it's particular use of perspective, probably belongs to the 3rd edition of his publication, dedicated to Northern Italy and dated 1854. The Basilica is photographed before the restorations promoted by the Austrian government in 1857, but carried out only after the unification of Italy. Upon the central arch of the narthex, one can make out the two-headed eagle of the Hapsburg's imperial coat of arms, which was removed in 1859 after the annexation of Lombardy to Piedmont and the Kingdom of Italy.
fullscreen 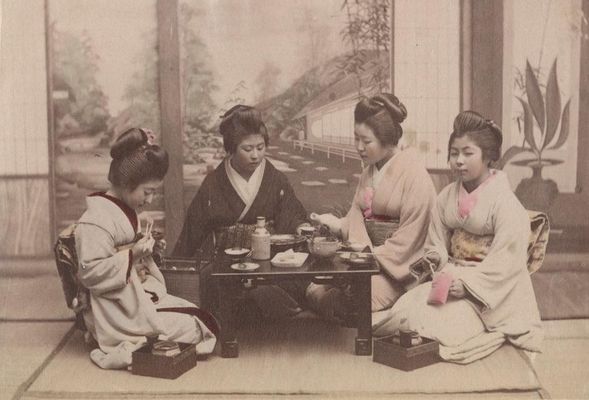 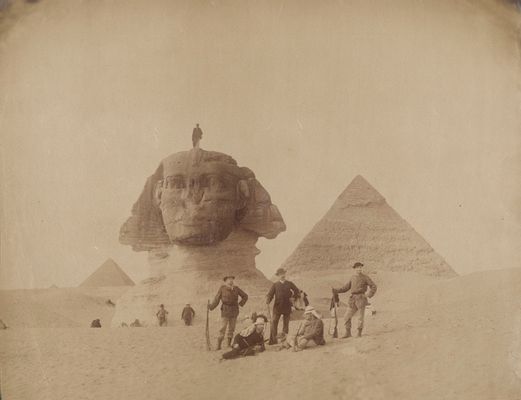 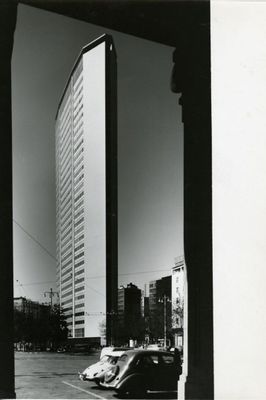 Pirelli Skyscraper
paolo-monti/grattacielo-pirelli
Paolo Monti
1960 - 1965
Gelatin silver bromide print
Paolo Monti's approach to the art of photography was gradual, developing his skills in line with the significant European artistic movements of the time, such as the Subjektive Fotografie, a German movement led by Otto Steinert. The years spent in Venice, where he moved from Milan for work, were a turning point in his career, both because of the effect lagoon life had upon him, and because of his meetings with other photographers. In the autumn of 1947, Monti founded “La Gondola”, a photographic club of which he was the main promoter and intellectual guide. This moment was the first step on a path that would lead him to become one of Italy's greatest photographers. In 1953 he returned to Milan, abandoning his career in industrial management to dedicate himself entirely to photography. He would spend his entire career as a professional photographer, focusing on the urban changes of the post-war period (from the Qt8 neighbourhood in Milan to the new working class housing of San Siro and the Pirelli Skyscraper), documenting the Triennale and the Museums of the Sforza Castle and projects on commission, including editorial works such as the History of Italian Literature (1965), edited by Cecchi and Sapegno, for Garzanti and the History of Italian Art for Einaudi (1979). He was given an important public role under the direction of Andrea Emiliani in 1965 for the documentation of the historic and artistic heritage of the Emilian Apennines and the historic centre of Bologna, a mammoth undertaking. In parallel with his professional work he conducted a significant amount of experimental research, working on photograms, chemigrams and colour materials.
fullscreen 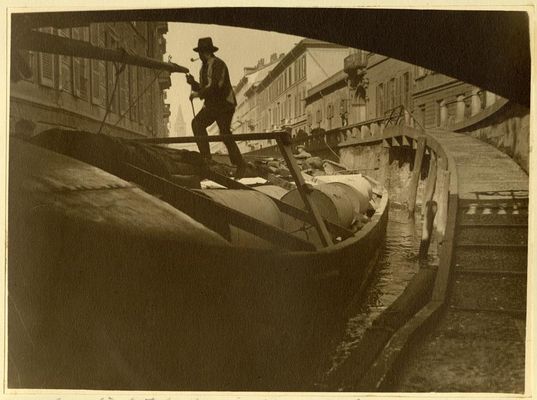 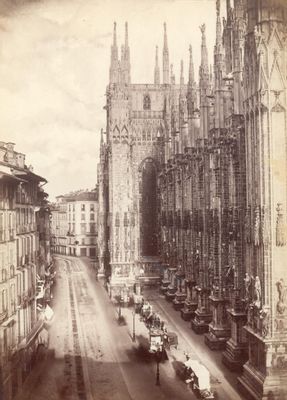 View of the southern side of the Duomo
pompeo-pozzi/vista-del-lato-sud-del-duomo-di-milano
Pompeo Pozzi
1870
Albumen print
Pompeo Pozzi, studied as a painter at the Brera Academy of Fine Arts and from 1848, worked at the printing firm he had inherited from his father, Luigi Valeriano. He soon became interested in photography and before long turned professional, dedicating himself to the faithful representation of monumental buildings and works of art. The art and photography magazine “L'Artista”, edited by Luigi Sacchi from 1859, was headquartered at his shop. In 1862 he was considered, in Antonio Caimi’s memoirs, among one of the best artists in Lombardy. He received important commissions from the city of Milan to photograph the buildings constructed by the technical offices and by the Veneranda Fabbrica del Duomo (the organisation charged with the construction and upkeep of the cathedral), which in turn hired him to document work on the cathedral. His photographs were acquired by a French diplomat and are today housed in the Bibliothèque Nationale de France and the École Nationale Supérieure des Beaux-Arts in Paris. The photograph of the southern side of the Duomo is a collodion contact print and was taken from the top of the Portico dei Figini building before its demolition and shows the facade of the building opposite the cathedral before the construction of the northern porticoes (1870-1874).
fullscreen 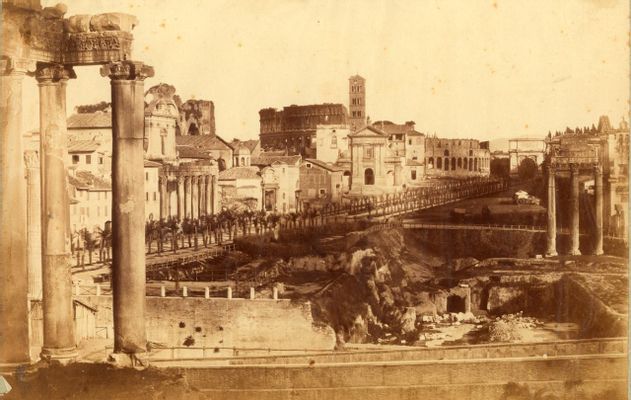 Roman Forum before the excavations, seen from the Capitoline hill
tommaso-cuccioni/foro-romano-prima-degli-scavi-visto-dal-campidoglio
Tommaso Cuccioni
1864
Salt print
Famous engravers and painters were not the only artists to deal with the theme of antique monuments, Rome's antiquities also attracted famous photographers of urban landscapes: first and foremost the calotypists of the “Roman School”: Flacheron, Eugène Constant, Alfred Nicholas Normand, Giron des Anglonnes and the perspective painter who converted to photography, Giacomo Caneva. Successively other famous photographers such as Anderson, MacPherson, Ashby, Chaufforiers, Sommer, Tuminello, Cuccioni, Altobelli and D’Alessandri, to name but a few, also dedicated themselves to documenting the antiquities of the capital. The photograph documenting the appearance of the Roman Forum, before Pietra Rossa's excavations of 1871 is attributed to Tommaso Cuccioni, because of its similarity to another photograph by Cuccioni, an example of which can be found in the Dietmar Siegert collection in Munich and another in the Dario Reteuna collection in Turin. Cuccioni became a print merchant in 1830 and with the advent of photography, began acquiring daguerreotypes for his shop in Via della Croce 88 and successively in Via dei Condotti 18, including those by Giacomo Caneva. Then from 1852 he took up photography himself, specialising in large format monumental scenery. He was praised at the Société Française de Photographie exhibition of 1859 for his scenes of the Roman forum, the colosseum, Laocoon and his Sons and the arch of Constantine.
fullscreen 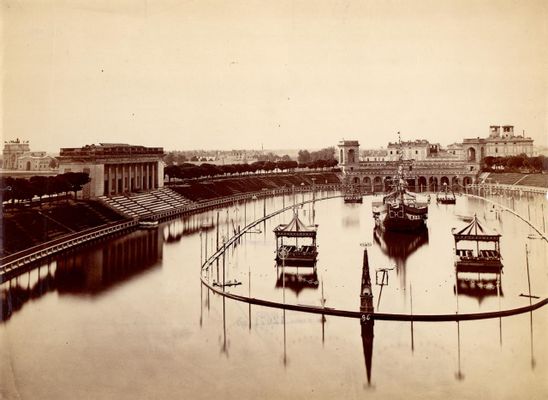 Milan: Nautical and Pyrotechnical Show at the Arena amphitheatre
undefined/milano-spettacolo-nautico-e-pirotecnico-all-anfiteatro-dell-arena
undefined
1863
Albumen print
The photograph shows one of the most unusual and intriguing programmes held at the arena, a pyrotechnical and nautical double bill that took place on August 2nd 1863, with boat races and chases, in which women from Venice, Como and Lake Maggiore competed in local costume. Another six small prints (93x130 mm circa) from a single negative, were made to help the photographer identify the correct exposure and contrast levels. The final print is the result of a series of trials that allowed the photographer to find the best angle for the photo. The construction of the large amphitheatre next to Piazza d'Armi, was initiated by Napoleon I in 1805 and completed in 1807 on the basis of designs by Luigi Canonica. The inaugural spectacle was attended by the Emperor, the Viceroy and the King of Bavaria. The Arena was flooded with waters from the Euripo canal, in turn connected to Milan's old network of waterways. For many years the Arena continued to be used for parties, performances, parachute landings, fireworks displays, renowned tournaments and ice skating shows. The most successful events, however, were the nautical displays, such as faux naval battles and boat races.

Other works on display

Inside a Japanese bedroom

A painter and colourist employed at the photographic studio opened by Felice Beato in Yokohama, Kusakabe also worked as an assistant to Baron Raimund von Stillfried. In 1881 he opened his own studio, contributing to the prestige that the “Yokohama School” was gaining among foreign travellers. Merging the art of the reportage and the cityscape, learnt from Beato, with the psychological approach to portraiture that he acquired in his work with Stillfried, Kusakabe became one of the most admired photographers in Japan, producing a vast archive of images of the country. The distinguishing feature of his work is the exceptional quality of his hand colouring, characterised by a broad chromatic range and particular density of colour. This photograph belongs to a rich repertoire of study portraits collected by Kusakabe throughout his career.

Other artworks in Milano 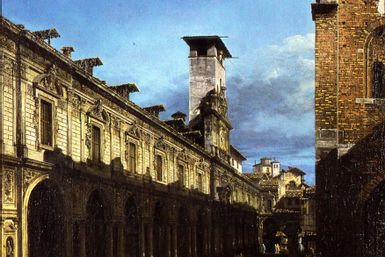 The Palazzo of the Jurists and Milan's Court of Justice 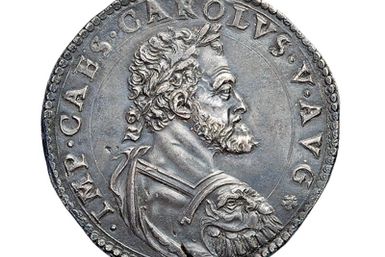 Silver scudo of the Habsburg King, Charles V of Spain 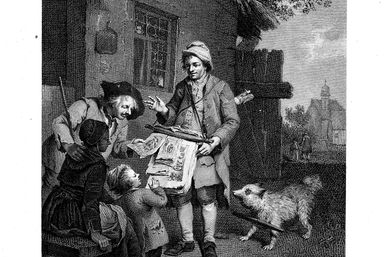 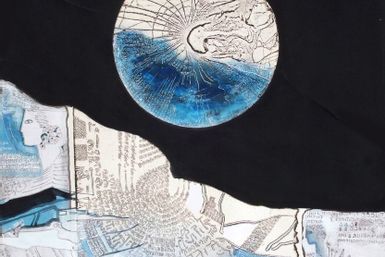 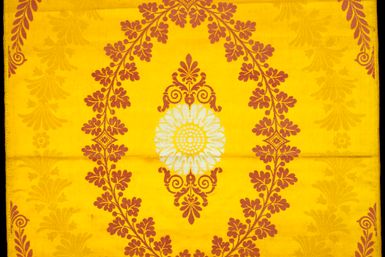 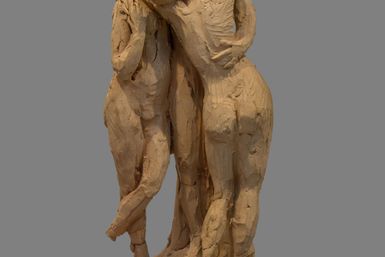 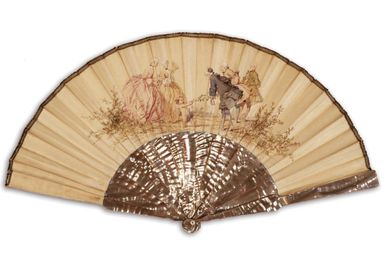 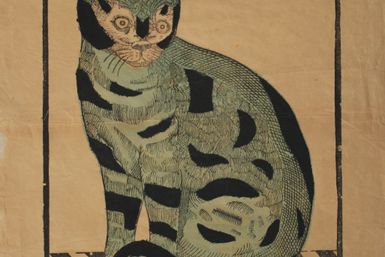